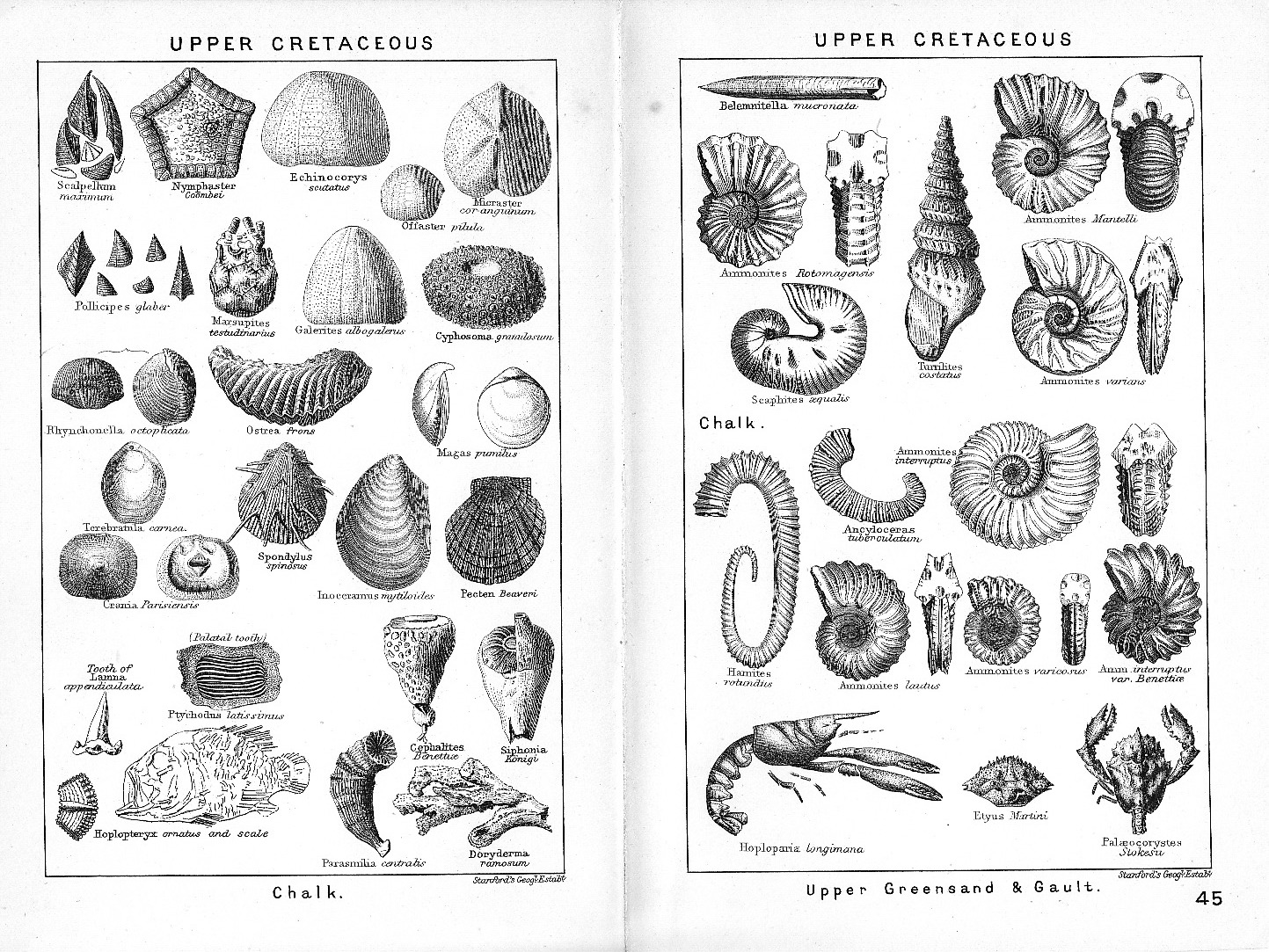 The Upper Greensand Formation within the Jurassic Coast World Heritage Site (WHS) is a glauconite-rich succession of sandstones and calcarenites, with thin sandy limestones (usually concentrations of shell debris) and dark brown splintery cherts. In east Devon the chert-rich sandstones reach their maximum thickness (c. 25 metres). In this area, the cherts are characterised by the presence of sedimentary bedding. Trace fossils and other macrofauna visible within the silica concentrations confirm that the cherts are replacement features within the diagenetic history of the sediment. The uppermost sandstones in west Dorset and east Devon are characterised by glauconite-rich cross-bedded sandstones that form a quite distinctive building stone. The macrofauna is dominated by the bivalves, especially Exogyra spp., although gastropods and echinoids are also well known. The Perinflatum Subzone is an important phosphatised horizon at the top of the formation in Punfield Cove. The microfauna is quite restricted due to preservational problems, although the sandstones of east Devon have yielded Orbitolina sefini.

The Gault Clay and the Upper Greensand formations within the Jurassic Coast WHS are generally sandy in character. At Swanage and in the Lulworth area the Gault is a poorly-fossiliferous silty clay and the sand content increases both westwards and up-succession. In east Devon the Gault is inseparable from the overlying Upper Greensand. Ammonites are often abundant: over 100 species have been recorded from the Gault and Upper Greensand in Purbeck. Microfossils are quite rare, with much of the formation decalcified and badly weathered.

The Kimmeridge Clay is represented in Dorset by a succession of mudrocks of variable organic carbon content, together with minor amounts of carbonate, siltstone, fine-grained sandstone and ironstone. The formation is remarkable in that it has some very high total organic carbon values averaging around 10 per cent but reaching up to about 60 percent. In contrast most mudrocks have a total organic carbon content of 0-2 percent. The individual mudrock beds of variable organic carbon content are generally tens of centimetres thick and reflect the changing chemical, physical and biological conditions in seawater at that time. The beds contain an abundant well-preserved fauna of mainly ammonites, bivalves, gastropods and vertebrates. It is the standard section for the Boreal Lower Tithonian (Bolonian) ammonite zones and is probably the only section world wide with good exposure of the Rotunda and Fittoni Zones. Recent work on samples from the Kimmeridge Clay Formation in Dorset presents the only radiometric date for the marine Tithonian world-wide. The Eudoxus to Fittoni Zones are exposed uninterrupted between Brandy Bay and Chapman’s Pool. Further sections, particularly of the lowermost zones, occur at Ringstead Bay, Osmington Mills, Black Head and West Weare Cliffs on the Isle of Portland.

Corallian. The deeper water facies of the Oxford Clay give way to shallower-water facies of sandstones, limestones and oolites in the Corallian Beds, the former name of this unit. Excellent examples of a variety of trace fossils can be found in many of the sandstone and limestone units. One of the sandstone units (the Bencliff Grit Member) shows an uncommonly preserved sedimentary structure termed swaley cross-stratification. This is one of the best exposures of such structures in western Europe. The Bencliff Grit Member contains mature hydrocarbons at the western end of the Bran Point exposure. This represents a dissected hydrocarbon reservoir: the hydrocarbons are most likely from the Lower Lias, similar to the nearby producing Wytch Farm and Kimmeridge Bay oil fields. In the middle of the Oxfordian succession there is an oolitic grainstone. The overlying Clavellata Member has a beautifully preserved ammonite/bivalve fauna. The Sandsfoot Grit Member and overlying Ringstead Waxy Clay probably represent a beach barrier complex and associated lagoonal facies. The top of the Corallian Group and base of the Kimmeridge Clay Formation contain a complex succession of very condensed beds with a rich, well-preserved fauna.

Oxford clay. The boundary between the Callovian and Oxfordian Stages is well exposed on the coast at Ham Cliff and is well-known for its ammonite faunas and contribution to Oxfordian biostratigraphy. Important individual features include the well-preserved aragonitic ammonites and nodule beds. In particular the Red Nodule Bed exposed at Furzy Cliff is associated with a beautifully preserved three dimensional ammonites and bivalves. The Dorset Oxfordian sections have contributed to significant publications and ongoing work in many fields. The Oxford Clay (Callovian) is hydrocarbon-rich and has produced fine faunas of marine invertebrates and reptiles. Callovian: upper Macrocephalus to Lamberti Zones.

The Cornbrash is exposed at Shipmoor Point, Berry Knap and near East Fleet. This thin limestone comprises a shallow-water facies with abundant brachiopods, bivalves and other fauna. The faunas show a major change within the Cornbrash at which the Bathonian/Callovian boundary is drawn. Lower Cornbrash (Barry Member), Bajocian: Discus Zone: Upper Cornbrash (Fleet member), Callovian: Macrocephalus Zone.

Forest Marble. Discontinuously exposed just west of West Bay, between Burton Bradstock and Abbotsbury Castle, and along the shores of the Fleet. The overlying sequence from the mudstones of the Fuller’s Earth through mudstones and calcareous sands of the Forest Marble to the limestones of the Cornbrash represent the third major sedimentary cycle (J3) of the Jurassic and the Bathonian Stage.

Fullers Earth. In the English Channel Basin the formation is predominantly mudstone with carbonaceous material at some levels and shell beds.