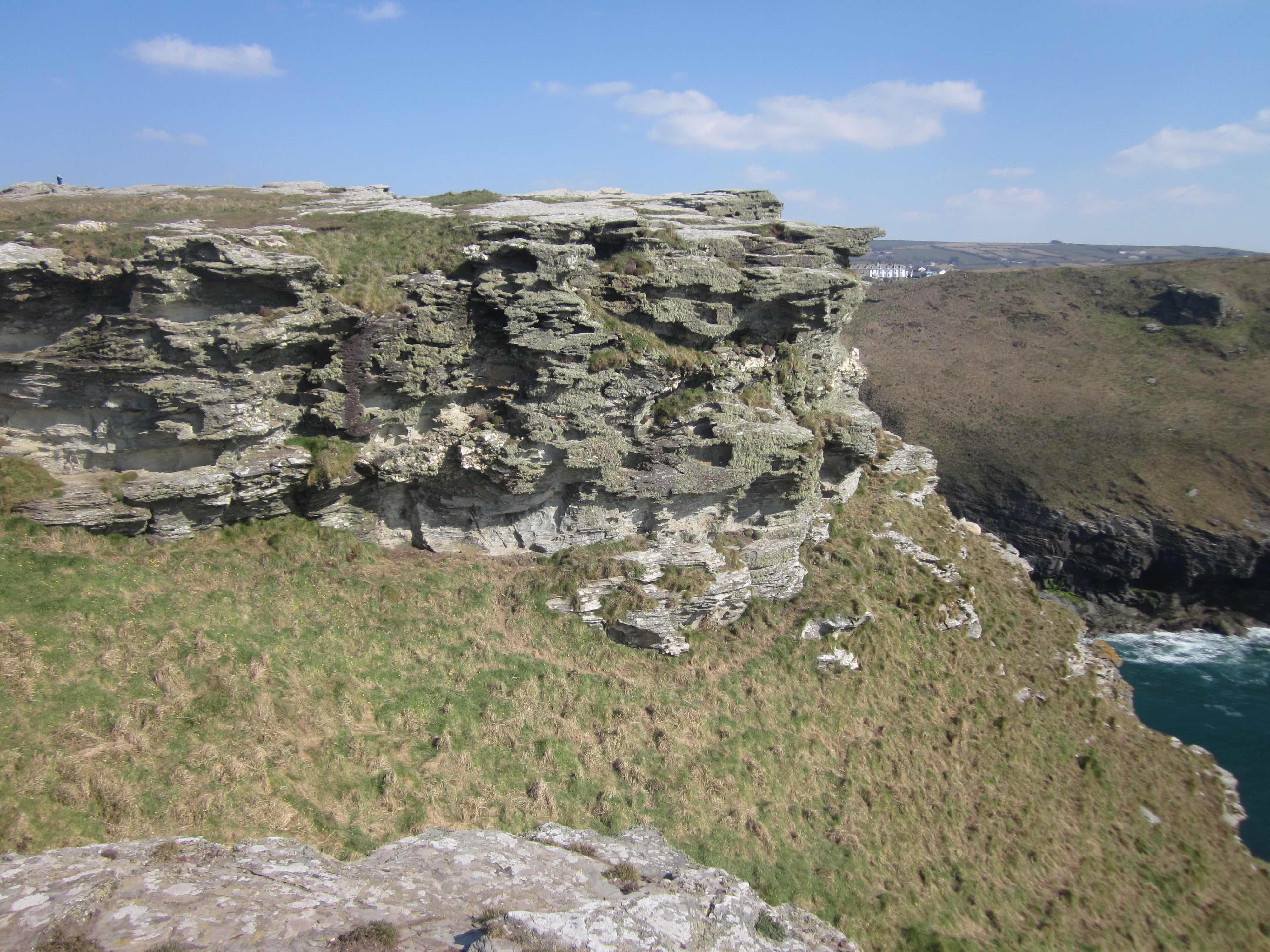 Tintagel Cliffs lie on the North Cornwall coast between Boscastle and Dennis Point. The cliffs exhibit considerable geomorphological and geological interest in addition to supporting an outstanding flora and fauna. Geomorphologically, Tintagel provides a classic assemblage of rock-coast features, including cliffs, caves, geos, arches and stacks. It is particularly important for the strong relationships displayed between coastal forms and bedrock structures and is one of few locations where such relationships have been studied in detail. Cliffs and platforms are cut in lower Carboniferous and upper Devonian rocks. The coastal edge displays slope-over-wall forms, some bevelled and some forming hog’s-backs. Normal faults have had considerable influence on cliff forms. South of Tintagel Island, some short stretches of cliffline are true fault-line cliffs. Elsewhere, erosion has cut cliffs back from their original fault-controlled position. North of Tintagel Island, the coastline is more complex, with many inlets and headlands. Erosion along normal faults, less resistant beds and joint-planes has produced an intricate set of bays, headlands, stacks, blowholes and caves. Here, local variations of structure and rock strength are the major control on landforms.

Geologically, the coastal section between Tintagel Head and Bossiney Haven shows the intimate association of various basic volcanic rocks with highly deformed sediments and is representative of a major outburst of Lower Carboniferous (Visean) extrusive volcanism in the Culm trough. Because of the pervasive deformation and higher than usual regional metamorphic grade, the volcanics are highly altered and schistose. In some cases (e.g. Barras Nose) the degree of alteration is unusually extreme and may produce secondary assemblages of chlorite-carbonate-magnetite.

Variscan structures are exhibited along the coastal sections between Tintagel Head and Smiths Cliff, and Dennis Point to Bagalow Beach. The first of these contains many excellent exposures of contorted Devonian and Lower Carboniferous slates and volcanic rocks. The structure of the area was described in a classic work more than thirty years ago and has been the subject of extensive detailed investigation ever since. The main interest lies in the complex sequence of major and minor structures which can be demonstrated. Much of the complexity arises from the strata being cut and displaced by many flat-lying faults which have produced a shuffled sequence of layers, very difficult to unravel and interpret. This has given rise to conflicts in interpretation which, as yet, remain unresolved. The excellent three-dimensional exposures offer an unrivalled opportunity to study the major, minor and microstructural elements of an important segment of the geological framework of south-west England.

Dennis Point to Bagalow Beach provides clear, accessible exposures of a disrupted sequence of Devonian and Carboniferous slates and volcanic rocks. The main interest here lies in the complex structural characteristics displayed; the rock sequence appears to be inverted but the interpretation of the sequence of events giving rise to this has proved controversial and remains as yet, in doubt. Evidence drawn from this site can be expected to be crucial in unravelling one of the major problems in the geological structure and history of south-west England and the site is therefore visited by many educational and research groups. A special feature of the site is the occurrence of remarkable exposures of flattened and distorted clasts of lava in the volcanic beds and of well-preserved, distorted fossils in the slates. These provide a wealth of detailed information about the amount and type of distortion suffered by the strata as a whole. This gives an invaluable insight into the structural evolution of this important element of the geological framework of south- west England.